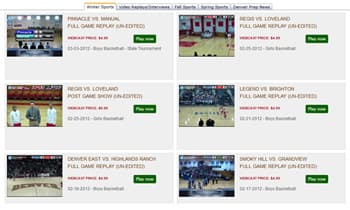 Playing with the dreams of sports fanatics, The Colorado Sports Cast Network, is an online haven for those who live, dream and breathe sports. Since 2008, the Colorado Sports Cast Network has been providing team marketing services to high school and club sports teams in the United States - from inner-city public schools to rural community schools and to suburban private clubs.

The Colorado Sports Cast Network provides an opportunity for high schools and other programs to have their games broadcast over the Internet with unlimited digital advertising opportunities.

The broadcasts are a fund raising opportunity for programs by allowing corporate team sponsors to advertise during a game. In addition to the game, the broadcast can include pre/post game interviews, coach's insight, and player perspectives.

StreamingVideoProvider's platform provided the ideal solution for The Colorado Sports Cast Network, by offering them varied options for uploading their videos, including internal (using internal uploaders located in the SVP control panel) and external uploaders (accepting videos from outside sources. Open to all major video formats, enabled with free flash FLV encoding and transcoding, and most importantly with no file restrictions, the platform provided an immediate solution to The Colorado Sports Cast Network's 100+ video webcasts.

By using the Pay-Per-View feature, Colorado Sports Cast Broadcasting is able to monetize its content. They can set up the desired ticket and can mix and match ticketing options.

Summarizing the benefits, Colorado Sports Cast Broadcasting rates "ease of administration use" top on the list of benefits it derived from partnering with StreamingVideoProvider. A platform which is fully automated and requires minimal human intervention is what they wanted and that continues to provide them with the flexibility to upload videos at their convenience.

The second top benefit is the user experience which Colorado Sports Cast Broadcasting is able to offer to its end customers. Live streaming is extremely important for much awaited events and with StreamingVideoProvider's platform, live streaming performance has attracted a larger audience than they planned or anticipated.